Revival of my own Interest in Shirret 2018: Surface Design Association

Surface Design Association of Connecticut is a chapter of a national group of textile and design artists. - http://surfacedesign.org - Recent exhibitions include the artisan collection Fair Haven Furniture, New Haven in late 2017.

The SDA Call for Entries theme announced was of text and words, curator Bruce Hoffman.

Somehow as I started sketching, in my combustive state after another suggestion of war with North Korea, climate change denial, and the incendiary comments made regularly as if this were normal behavior, I thought about the power of women.

I thought about the Venus de Willendorf, one of my favorite works of art, created in Paleolithic Age Europe around the year 28,000 bc, or around 30,000 years ago, and found in lower Austria.

It is thought that women carved these icons, while looking down at their own bodies, and from looking at their reflections in the surface of still water. 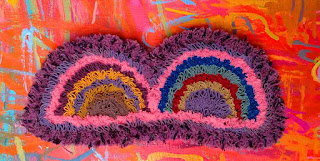 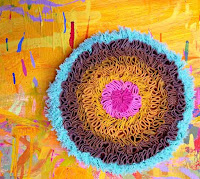 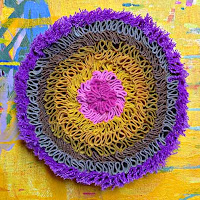 I worked on this 5 days to get a 'cartoon' idea of it out, photographed and submitted it for the show to get it in on deadline. Then I tore it out.

The next morning I began remaking it with better technique. It was way too primitive.

I have another idea for a simple one, made with 3 round shapes surrounded by a row of stripes. 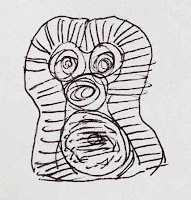 Posted by Louise McCrady at 2:32 PM No comments:

Shirret in the Exhibition at City University of New York Queens College, Fall 2017

Last summer I made the Shirret rug pictorial above, for The Fabric of Cultures exhibition at City University of New York Queens College, curated by Eugenia Paulicelli, PhD, head of Italian Studies, Fashion and Film. Her research involved the exploration of handmade decoration in fiber and fashion.


As an artist I have always felt a connection to Louise Bourgeois and her sculpture from when I first met her at an opening, including her family history in textiles. She's my height. She's French.
Posted by Louise McCrady at 1:21 PM No comments:

I'm a colorist and painter, and Adjunct Professor of Textile Design and Digital Design at Eastern Connecticut State University. I teach Painting and Drawing in New Haven. I make paintings using the name Lexi Axon.

I taught shirret to a large group at the invitation of Eileen Fisher Lab in Irvington NY on the Hudson River. Among the Eileen Fisher designers who work there, community members including architects and film industry people, and Storm Field the New York TV meteorologist, learned to Shirret in the workshop! They have upcycled EF clothes on sale there too, so I brought home a            couple great Italian knit jackets.


Posted by Louise McCrady at 12:40 PM No comments: